Flora of the Inca Trail

The Historic Sanctuary of Machu Picchu and the Inca Trail are characterized by having a diverse wild flora and have species from high-Andean areas, such as the jungle. Species with polylepis, ferns, shrubs, orchids and vascular flora stand out. It is considered that there are 50 species of trees per hectare, almost 200 species of orchids, moss and grass areas, bamboos, cultivated areas, bromeliads, wood species, such as cedar and laurel have been recorded. There are also shrubs, such as the muña, the Pisonay Erythrina falcatas, a variety of begonias and puyas. Finally, there are a variety of food and medicinal plants. Then get to know the most representative flora of this route.

Note:
In the case of the Inca Trail, the flora is distributed in geographies that vary from 2,800 meters above sea level to 4,215 meters. This variety of altitudinal floors, influence not only the vegetation, but also the climates. Nine life zones of tropical forests are considered: mountainous humid forests, mountainous forests, tropical rain forests, very humid forests, subtropical moors, and pluvial tundras.

The scientific name for orchids is: orchidaceae. It is one of the most widespread flowers in the world .

Its flowers are distinguished by the beauty of their color as well as the symmetry of their petals. It is estimated that there are up to 30 thousand species around the world. This flower can grow in various geographies of the world except desert areas or areas of intense cold.

Along the Inca Trail, approximately 400 species of orchids have been recorded . Perhaps one of the most famous is the ‘Wiñayhuayna’, a name that also receives one of the archaeological sites that the Incas built along the way.

Another of the most famous orchid species on the Inca Trail is the ‘Waqanki’. About this flower there is an Inca legend that tells that a soldier fell in love with the Inca’s daughter. The emperor punished the commoner by sending him to war. The Inca princess shed tears in search of her lover. Then, from her tears on the ground, orchids called ‘Waqanki’ (tears in the Quechua language) bloomed. 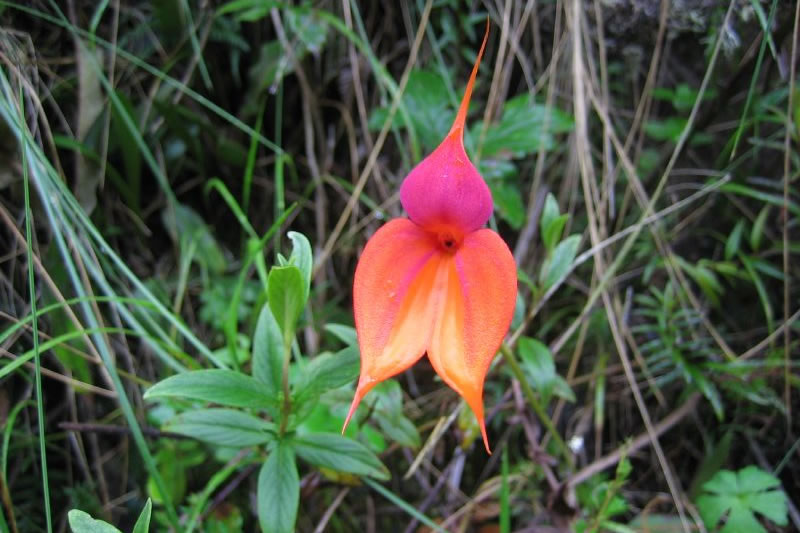 The scientific name of the molles is: schinus molle . It is one of the most cultivated shrubs, not only on the Inca Trail, but in the entire Andean region of South America.

These trees reach between 6 and 8 meters high. Its trunk can measure up to 30 centimeters. It has branches of leafy leaves.

Research indicates that it is of Andean origin: in the central Andes and the highlands of the current countries of Peru, Chile, Bolivia and Argentina. However, they are currently distributed in several countries around the world. The reason is its resistance to high temperatures and dry climates.

Along the Inca Trail, especially in the Andean area (first days) it is common to come across these bushes . The Andean people often use its leaves for analgesic and healing purposes. 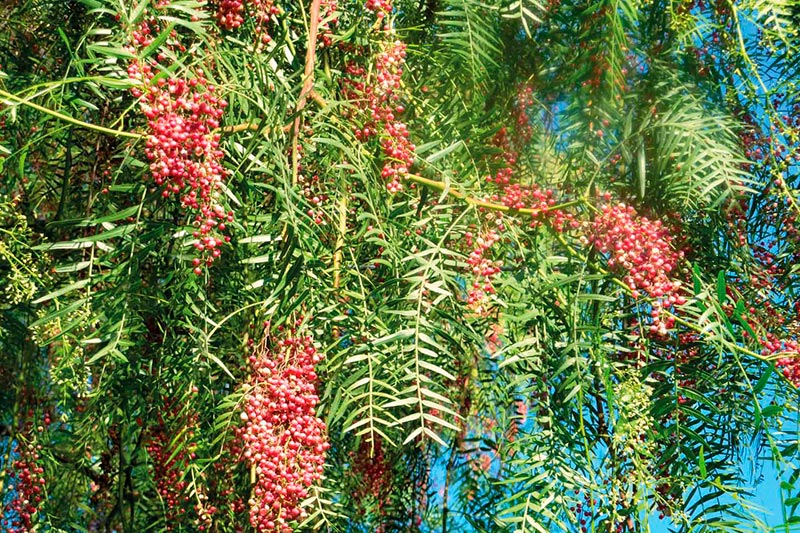 The scientific name for cedars is: cedrus . These trees, their species and subspecies, are distributed almost throughout the world. They belong to the ‘Coniferous pinnaceas’ family. They stand out for their ornamental function and their fragrant wood.

Cedars can reach 25 to 50 meters in height. During the Inca Trail, the species called ‘Cedrela montana’ abounds. The most abundant species in the world are: the Atlas cedar, the Cyprus cedar, the Himalayan cedar and the Lebanon cedar. The figure of this tree appears on the flag of the latter country.

Cedar wood is widely used for its hardness and resistance to rot and fungus.

During the Inca Trail, especially when entering the tropical jungle of Cusco, cedars adorn the path.

This shrub is a native species of the Andes. It is characterized by its twisted trunk. Its maximum height can reach 20 meters while its trunk two meters in diameter.

One of the most striking characteristics of this tree is that it can inhabit geographies above 5,000 meters above sea level. Also because its branches can absorb rainwater in a great way.

The Andean settlers also use the branches and trunks of the queñual as firewood. Research indicates that there are more than 14 species in Peru.

During the Inca Trail, the queñual is visible in the first days of hiking (in the high Andean geography of the route). 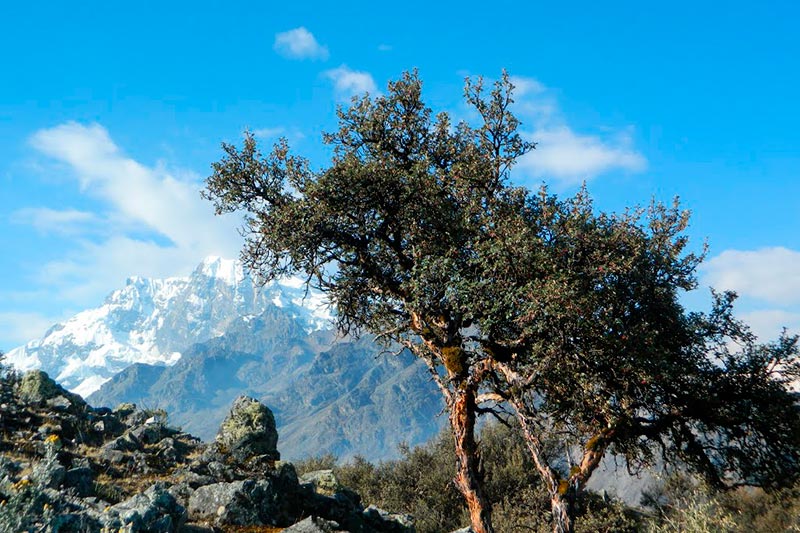 The archaeological site of Phuyupatamarca is located 5 kilometers in a straight line from Machu Picchu. The view to this place takes place on the third day of the Inca Trail. It is located 3,665 meters above sea level. Its discoverer, researcher Hiram Bingham, named it Qorywayrachina. It is also known as ‘Place above the clouds’ because the dense fogs usually cover with their white blanket in the mornings.

The fern’s scientific name is: Pteridophytes . This tree, which has various species throughout the world, has been known to adapt to different geographies. That is why they are among the oldest plants on the planet. They are known as living fossils.

Tree ferns are very abundant in the Historic Sanctuary of Machu Picchu and along the Inca Trail. These plants are used ornamentally. For this reason, some species are considered threatened and in danger of disappearing.

Many of the fern species that inhabit Machu Picchu are millions of years old.

In the Wiñayhuayna – Intipunku sector (last stretch of the Inca Trail) twelve species of ferns have been registered in 2011. A few years ago, 15 species were recorded.

Ferns are visible along the Inca Trail, especially in the last leg of the 4-day trek. 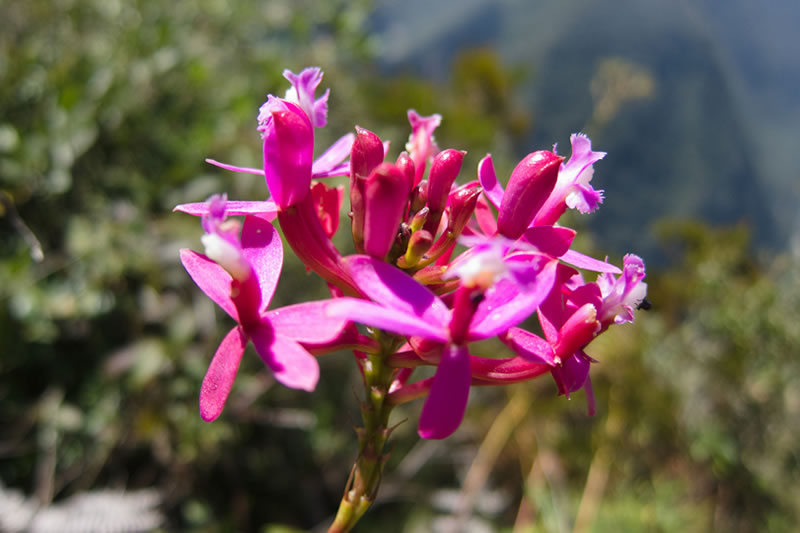 Puyas are a genus of plants in the ‘Bromeliaceae’ family . They have up to 180 species located in the territory of South America and southern Central America. Currently there are only 23 accepted.

Perhaps the most famous puja is the ‘Puya raimondi’, which reaches 3 meters high and is the tallest bromeliad in the world. The name of this species is due to its discoverer, the Italian-Peruvian naturalist Antonio Raimondi.

Puyas are characterized by their slow growth, one of the slowest in the world (it can take up to 150 years to bloom).

Along the Inca Trail, especially during the first days, it is possible to appreciate some species of this plant. The puya raimondi, is visible not only on the Inca Trail but on other hiking routes in Cusco located at a high altitude (above 4 thousand meters of altitude). 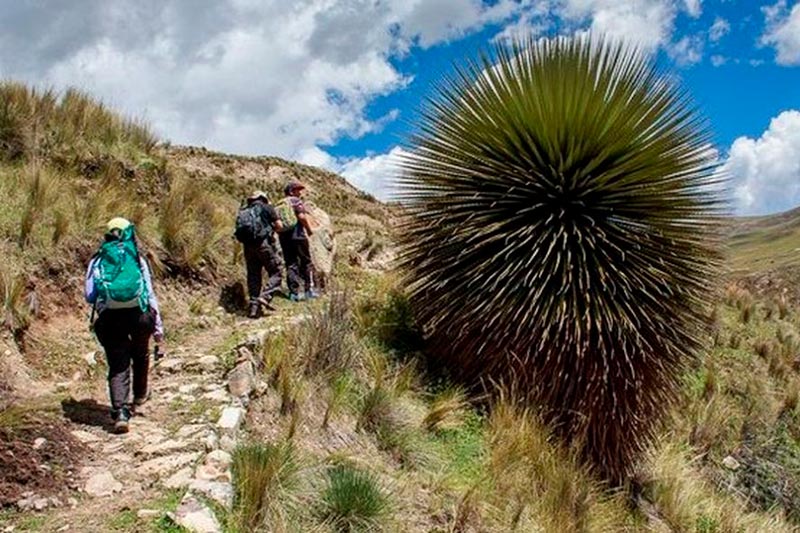 The scientific name of the floripondios is: brugmansia arborea . This species of shrubby plant is native to South America and adapted to the rest of the world. It is famous for its beautiful conical cleft calyx flowers. These flowers are widely used for ornamental purposes. They can reach 17 centimeters in length.

During the Inca Trail, the floripondios grow wild and are very abundant during the last days of hiking (when the tropical region of Cusco is crossed).

It should be noted that the consumption of this flower can be toxic to people or animals. They contain alkaloids such as hyoscyamine or scopolamine, the ingestion of which is harmful to health.

Carnations are numerous in the world. In South America and the Inca Trail, the species called ‘Carnation of the air’ stands out, whose scientific name is ’tillandsia aeranthos’ . This plant is abundant in the tropical forests of Peru, Argentina, Ecuador, Paraguay, Uruguay and Brazil.

Its main characteristic is its flower with three pink and blue sepals. Its pistil is longer than the stamens. It has a tribolate stigma on its end.

Its main use is as an ornamental plant. It does not require soil since its leaves are the ones that absorb water and nutrients .

During the Inca Trail, you can appreciate these plants during the last days of hiking (in the tropical region of Cusco).