Characteristic fauna of the Inca Trail

The Inca Trail is a route full of adventure, history as well as flora and fauna. The Sernanp (National Service of Natural Protected Areas by the State) has reported an approximate of 13 species of fish, 12 species of amphibians, 22 species of reptiles, 423 species of birds and 53 species of mammals. Only in Machu Picchu, the final destination of the route, stands out the presence of animals such as llamas, giant hummingbirds, cock-of-the-rocks and, sometimes, the famous Andean bear.

Its scientific name is tremarctos ornatus. It is also known as the Andean bear. It inhabits humid forests where there are trees and water is abundant.

The spectacled bear is herbivorous (only 4% of its diet is not vegetarian). Has solitary habits. It can measure up to 2.2 meters on two legs. It is characterized by having white spots around its eyes. Due to this characteristic it receives its name.

This animal is linked with myths and legends that consider it a ‘totem’. He is related to some Andean folk dances, where he is known as ‘ the ukuku ‘, the son of an Inca princess with a bear.

The spectacled bear can be seen during the Inca Trail. It is not an animal that usually attacks humans. Even so, if you meet one, it is best to get away and take pictures from a distance. 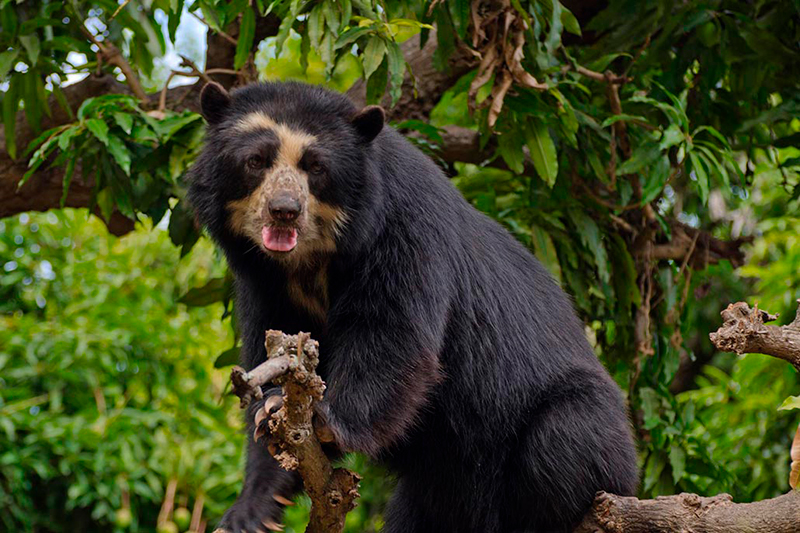 Its scientific name is puma concolor. It inhabits almost the entire American continent for which it is known in different ways, according to each region (it is also called a mountain lion, American lion or simply puma).

The territory of the Andean puma extends from Canada to the end of the Andes Mountains. They can also occupy territories above 5,000 meters of altitude and South American tropical forests.

Unlike other felines like the lion, this one only purrs. Its food source is camelids, rodents and even insects. Despite the human invasion of its territory, the Andean puma prefers to avoid contact with men.

During the Inca Trail it is very rare to come across an Andean puma. These tend to move away from the paths made by men and occupy the mountainous areas of Cusco. In case you run into one, just back away slowly, make noises, and try to chase it away. 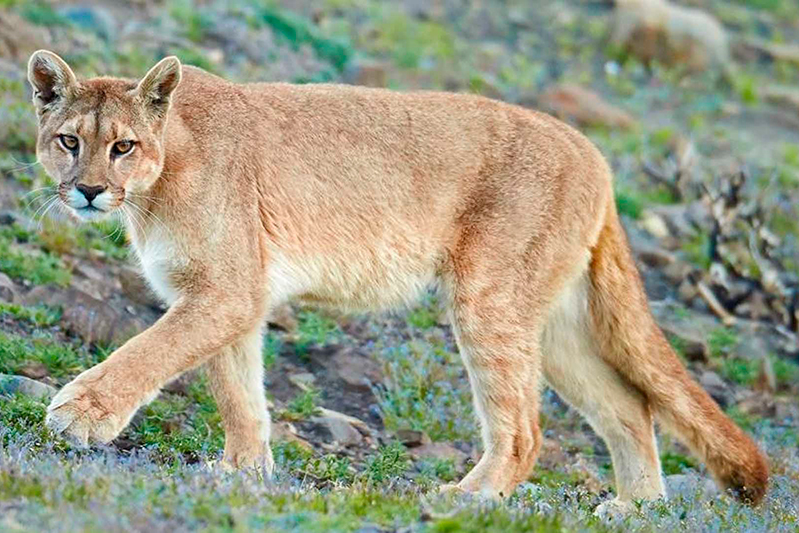 Its scientific name is vultur gryphus. It is the second largest bird on the planet, only after the albatross. In length it can reach 1.42 meters while with stretched wings it can reach 3.30 meters in wingspan.

Its natural habitat is the Andes Mountains (mountains of Peru, Ecuador, Bolivia, Colombia, Chile, Venezuela and Argentina). It feeds mainly on carrion. It is characterized by its large size, black wings and its great sense of smell and sight.

The condor can travel great distances in a short time, from heights of 6 thousand meters above sea level to the coast of the Pacific Ocean. It is currently considered a ‘near threatened’ species.

During the Inca Trail it is not very recurrent to appreciate condors although it is possible, especially on the first day of the trip. 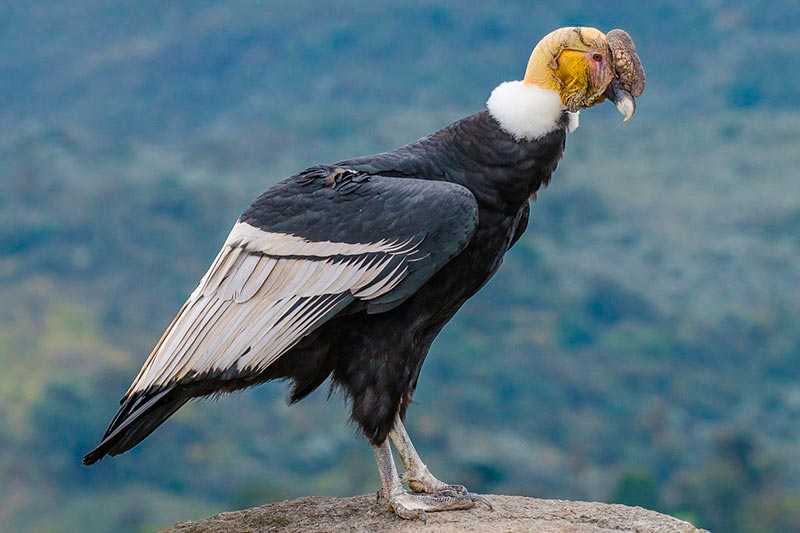 Its scientific name is Hippocamelus antisensis. It is an endangered deer that inhabits the Andean escarpments. It moves through the forests from 1,500 meters of altitude to 3,200 meters.

It is known as the Andean deer. It is a slender animal that can reach 80 centimeters tall and has a short coat and small horns.

It uses its hooves to climb the Andean forests. They are elusive animals from people. They can live 14 years.

During the Inca Trail, especially in the last days of hiking, it is possible to see them hidden among the forests. However, these animals often escape quickly when they see humans. 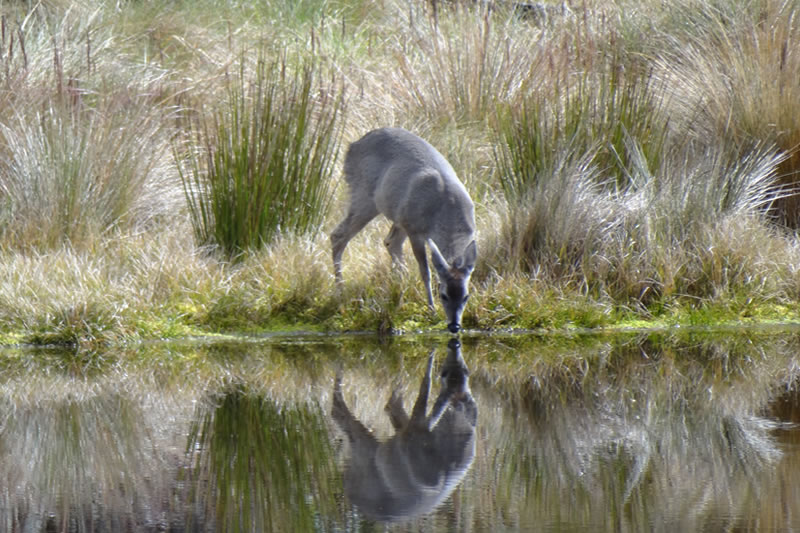 Its scientific name is lontra longicaudis. It is also known as’ Northwest Otter, Neo Tropical Otter or Water Dog. It inhabits the mighty rivers of Central and South America.

This carnivorous mammal is found in mountainous regions up to 3,000 meters above sea level. In Machu Picchu it can be seen in the rainy season when the Urubamba River rises. His body reaches 2 meters long.

The river wolf is a threatened animal due to the depredation of its habitat due to population growth and the exploitation of wood.

On the Inca Trail it can be seen from a distance, resting on the rocks of the Vilcanota River during the last days of the trek. 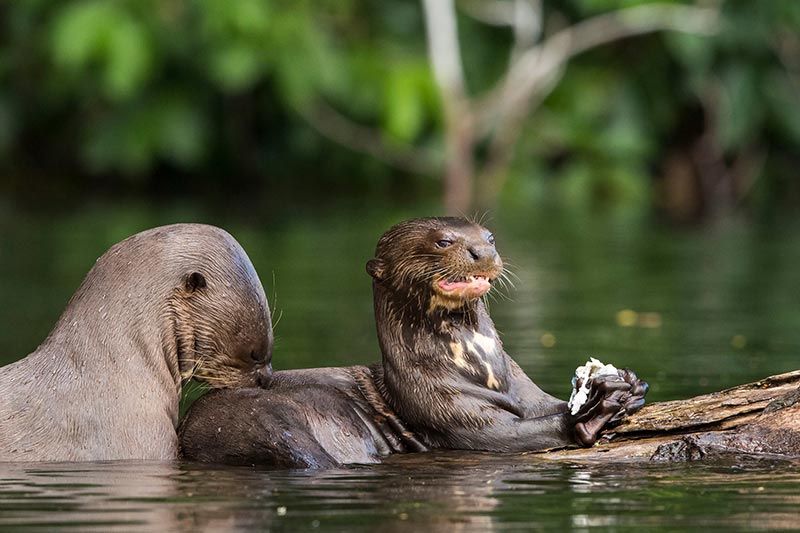 Its scientific name is rupicola peruviana. It is considered the national bird of Peru. It inhabits the Andean – tropical regions of South America. The male specimens have a reddish and black coloration of great beauty.

In other South American countries it is also called ‘gallito de las sierras’ (Venezuela), Andean rooster (Ecuador) or Andean rock rooster (Colombia). Its name is related to its nests on rocky cliffs far from predators.

The cock of the rocks is very seen on the way from Aguas Calientes to the Mándor waterfalls. It is 32 centimeters long. The male has very vivid colors between red, orange and black, while the female is only gray. It is a solitary and silent bird. During mating season, about 50 males gather on the rocks to be chosen by the female.

During the Inca Trail it is possible to observe them on the last and penultimate day, on the mountain cliffs hidden among the vegetation. 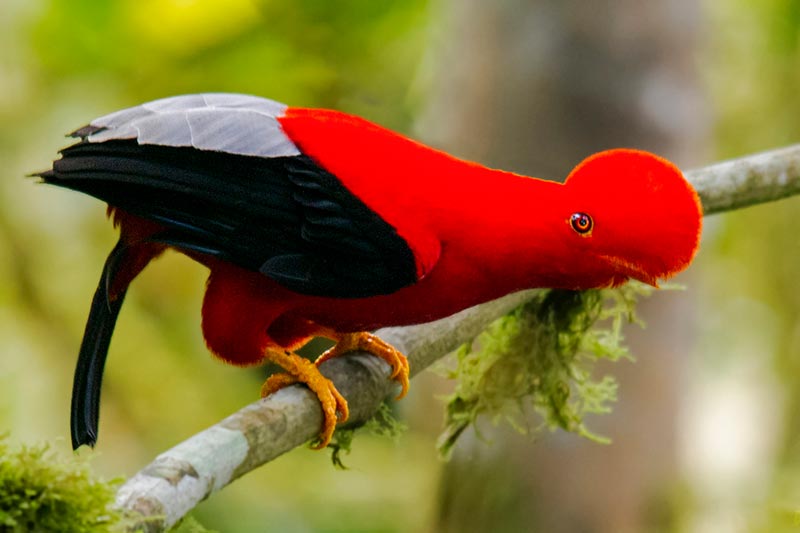 It has a brown color with white spots on the eyes. It measures 22 centimeters and is in critical danger of extinction because its population is small.

This bird is very seen along the Inca Trail and throughout the Historic Sanctuary of Machu Picchu. 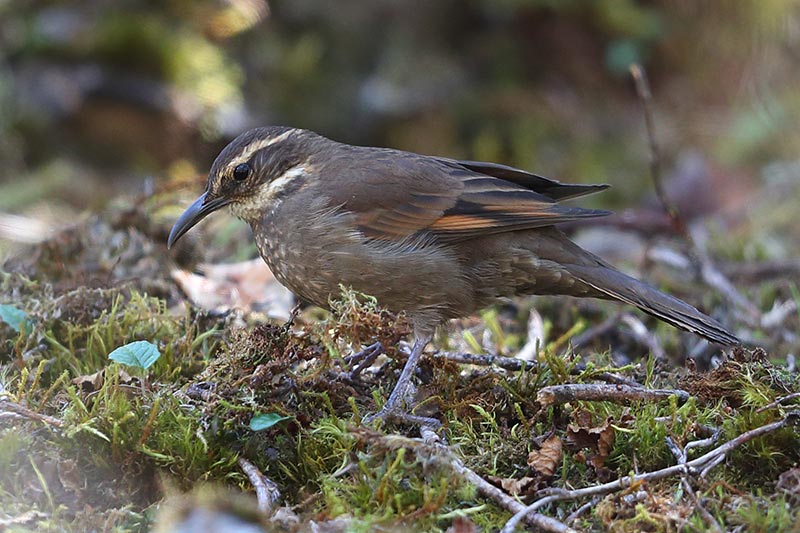 Its scientific name is merganetta armata. It is also known as the torrent duck or current breaker duck. It inhabits the fast-flowing rivers in the Andes Mountains. It prefers altitudes between 1,500 and 4,500 meters above sea level.

In the Historic Sanctuary of Machu Picchu it is usually observed in the rainy season (between November and April). It has a showy plumage, red bill and red legs in the male while yellowish in the females. It measures between 38 to 46 centimeters.

During the Inca Trail it is possible to observe them from a distance over the waters of the Vilcanota River. Especially in January, February or March.

Its scientific name is Bothrops andianus. It is an endemic species of poisonous snake. Adults are normally 60 to 70 centimeters tall.

It inhabits tropical mountainous regions of Cusco and Puno in Peru. It prefers habitats between 1,800 and 3,300 meters above sea level.

It has a brown and lead coloration that easily mimics them. However, they do not usually crawl on the trails of the Inca Trail (yes in the restricted forests for visitors). In case you come across one, it is best not to disturb her and continue on your way. 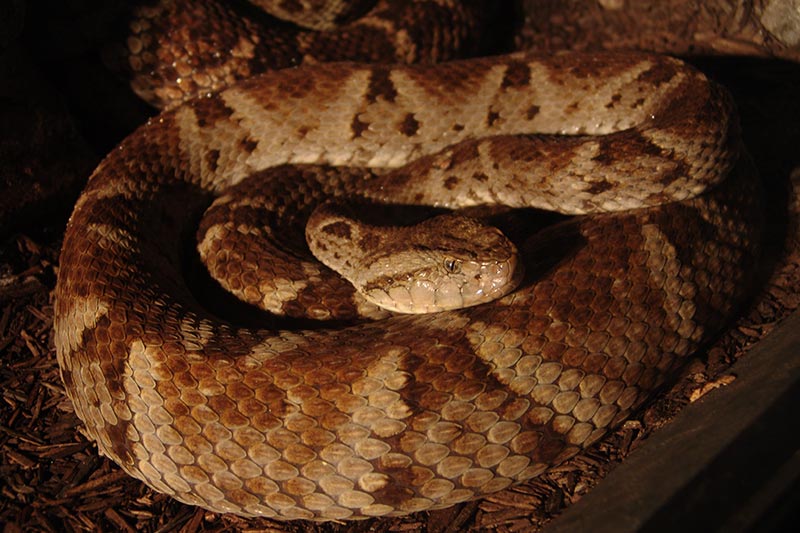 Its scientific name is telmatobius. It is a genus of amphibians that have more than 64 species, many of which are endemic. They inhabit the Andean mountain range, mainly in the tropical mountainous geographies of Peru, Bolivia, Ecuador as well as the north of Chile and Argentina.

This water frog measures 53 to 67 millimeters. It has an orange coloration. It lives in wetlands, springs and streams. In the Historic Sanctuary of Machu Picchu there are several species, many of which are on the way to extinction.

Along the Inca Trail it is possible to see them, especially in the streams in the rainy season (mainly in January, February and March).

Its scientific name is patagona gigas. As its name suggests, it is the largest hummingbird on the planet as it can reach more than 18 centimeters. There are two registered subspecies: the giant hummingbird from Chile and Argentina as well as the Peruvian giant hummingbird.

This last subspecies inhabits Andean tropical regions such as the Historic Sanctuary of Machu Picchu. They can be seen in regions from 1,500 to 3,500 meters above sea level. Its brown and white color stand out. Their flight is not as fast as common hummingbirds. It is not on the way to extinction.

Along the Inca Trail it is possible to appreciate the giant hummingbird during the four days of walking.

Butterflies ‘lepidoptera’ abound during the Inca Trail. There are species of many types of colors. It is estimated that in the Historic Sanctuary of Machu Picchu there are more than 500 species of butterflies.

Sernanp reports that 10% of butterflies in Peru are found in Machu Picchu and the Inca Trail. On the hiking route, they are most seen during the last days of walking (they preferably live between 1,800 and 2,000 meters above sea level.

The scientific name for the llamas is Lama glama. This mammal belonging to the ‘camelid’ family inhabits the cold and mountainous regions of the Andes Mountains in countries such as Peru, Bolivia, Chile, Ecuador, Colombia and even Argentina.

Llamas are domesticated. The Incas used it as cargo transportation and for the quality of its wool. Its meat is also edible.

During the Inca Trail they are not visible until the end because in Machu Picchu there are about twenty llamas grazing through the archaeological site. Tourists can be photographed with one, as long as it doesn’t disturb them.

Llamas are docile and curious animals that like to get close to humans. However, if they feel threatened, they defend themselves by spitting. 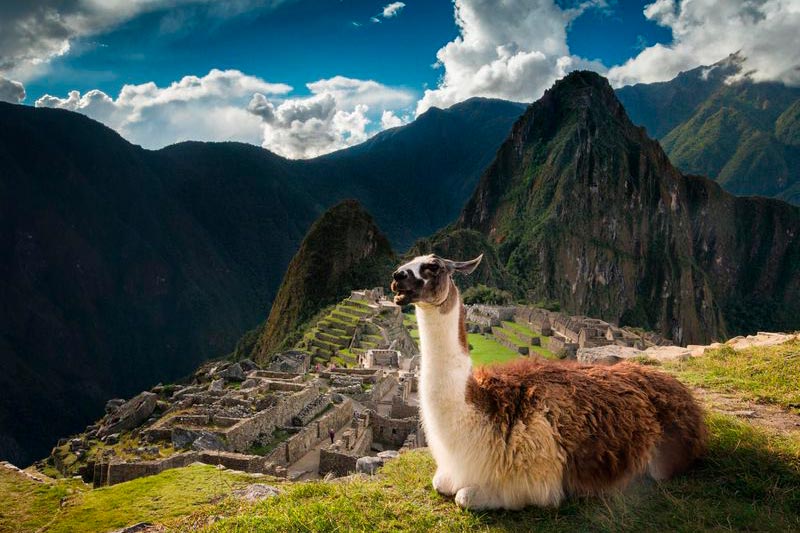