The cock of the rocks on the Inca Trail

The cock of the rocks is considered the national bird of Peru. It is considered one of the 50 most spectacular birds in the world. It lives in the high Amazon region (nests in high rocky crags). It belongs to the passerine bird species and is highly admired for its exotic plumage. They live in the Historic Sanctuary of Machu Picchu so they can visit during the Inca Trail.

Note:
The cock of the rocks inhabits the so-called ‘Historic Sanctuary of Machu Picchu’, an area of 35 thousand hectares protected by the Peruvian State. The Inca Trail crosses part of this immense territory that also includes the archaeological site of Machupicchu. In Cusco this bird can also be seen in the Manu National Park, about 127 kilometers away from the city of Cusco. Because it is an elusive bird, it is difficult to spot it in its natural habitat.

The Rupicola Peruviana (scientific name) is one of the 50 most spectacular birds in the world.

The local people call it ‘Tunqui’. It is considered the national bird of Peru. It lives in the Amazon region. It belongs to the passerine bird species and is highly admired for its exotic plumage of intense red and black.

They live in the waterfalls and on the hills where they hide their chicks. They are very sullen birds and are highly persecuted for their monetary value on the black market.

It is a bird the size of a medium chicken, it has a short beak, strong legs and claws.

The female has a dull brown color, with dark wings. However, the male is very showy with fiery orange plumage, with black wings and a huge orange plume.

The males have an impressive appearance, contrary to the female who has a simpler appearance.

This is known as a sexual dimorphism. It is said that the male is more showy to conquer the female. He eats wild fruits. Digest seeds by scattering them through trees. In this way it produces an ecological balance.

It starts in October and ends in November with incubation.

The courtship consists of an exhibition before the females and it is a competition, between several males, who come together in a single place with the name of ‘lek’.

There, among the branches of the trees, the males dance. After the courtship of jumps, wing movements and particular sounds, the females decide to their partner with whom they will reproduce.

Nesting is done only by the female who prepares the nest for the eggs without the help of the male.

The care of the eggs and the chicks is in charge only of the female because the male attracts predators by his colors. 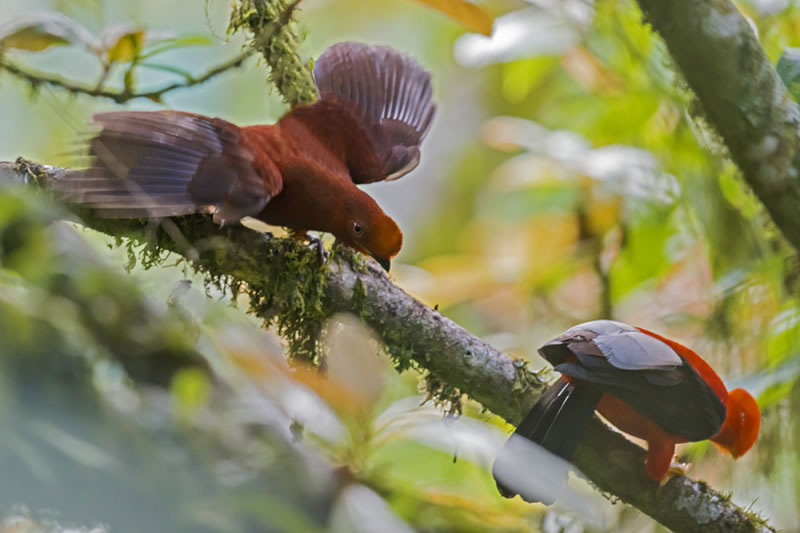 The cock of the rocks on the Inca Trail

The Inca Trail takes 4 days. On the third day, they descend through tropical paths that are home to the cock-of-the-rocks. However, these elusive birds are not easily seen.

The cock of the rocks in Machu Picchu

The ‘tunki’ or cock of the rocks spends most of its time in the ‘lek’ that are near the rocks and the falls.

From the town of Aguas Calientes (also known as Machupicchu town) you can take a 1 to 2 hour walk following the railway line to the Mándor gardens.

From this place you can see waterfalls where cock-of-the-rocks roam, especially in the mornings.

At sunset they can be seen for one or two hours.

In the archaeological site of Machu Picchu it is not common to observe them.

The Manu National Park (in the Peruvian departments of Cusco and Madre de Dios) is one of the best places to spot this bird in its natural habitat. From the city of Cusco you can visit this park protected by the Peruvian State.

The Inca Trail is famous for the diversity of flora and fauna that can be appreciated during the route. This trek is done only through a tour organized by a tourism agency. Due to its fame, the purchase of the service has to be made 6 or 7 months in advance. Availability is limited.