Machu Picchu, the final destination of the Inca Trail

Machu Picchu is the final destination of the best hiking route in Peru: the Inca Trail. There, visitors can tour its most famous buildings such as the Intipunku, the Main Plaza, the Temple of the 3 Windows, the Intihuatana, the Sacred Rock, the Temple of the Sun and much more. Also, as an optional route, you can ascend the Machupicchu or Huayna Picchu mountains. Learn more about the final destination of this amazing trek.

Note:
There are three ways to get to Machu Picchu: with the train trip, with the alternative rune by Hidroeléctrica and through the Inca Trail. The latter is the most adventurous way. The Incas used this route to reach the Inca city. The entry point is the famous Intipunku, the Puerta del Sol. From there you have the first view of the wonder of the world. For many, this first impression is unforgettable. It is the highest prize after the 39 kilometers (in 4 days and 3 nights) of the Inca Trail.

The Inca Trail, the route of 4 days and 3 nights

The Inca Trail runs through a section of the qhapac ñan that the Incas used to communicate the city of Cusco with Machu Picchu.

A part of this route, the last 39 kilometers, has been recovered by the authorities of the Ministry of Culture of Peru. This is how one of the best hiking routes in Cusco was created, which they called the ‘Inca Trail’.

The Inca Trail lasts 4 days and 3 nights. Along the way, in addition to the sections built by the Incas, there are other Inca citadels such as: Llactapata, Runkuracay, Sayacmarca, Phuyupatamarca or Wiñayhuayna.

However, definitely the best archaeological site is Machu Picchu. The wonder of the world is the ultimate prize for a challenging hike.

The Inca Trail route is protected by the Peruvian State. Therefore, a special permit must be obtained to travel its roads. This permit is granted through a tour organized by a tourism agency.

Tours are in high demand so the purchase must be done online 6 or 7 months in advance.

Machu Picchu is the final destination of the 39 kilometers that are covered during the Inca Trail.

The Incas entered Machu Picchu by the same route of the Inca Trail. That is, after several kilometers of walking, they accessed the Intipunku, the door of the sun. From there they descended to the Inca city where the temples, enclosures and other constructions of the place were located.

Currently the archaeological site of Machu Picchu has more than 150 buildings. Some of the most important are: the Intipunku, the Inca Bridge, the House of the Guardian, the Main Square, the Temple of the 3 Windows, the Intihuatana, the Sacred Rock, the Temple of the Condor as well as water channels, platforms and more..

Tourists who make the Inca Trail enter Machu Picchu just as the Incas did. That is, the first view they will have of the archaeological site is an incredible panoramic landscape.

The tour of Machu Picchu takes approximately 2 hours. It is forbidden to go back so once outside the archaeological site, it is not possible to return. The tour with a tour guide is mandatory. The tour to the Inca Trail already includes a tourist guide.

What to see in Machu Picchu?

These are some of the most important constructions of Machu Picchu:

The Intipunku – La Puerta del sol is the entrance to Machu Picchu used by the Incas. It consists of several stone walls with windows and niches from where you have spectacular views of the entire place. At the summer solstices the sun’s rays fall on the Intipunku. There are only two ways to get there: with the Inca Trail or with an uphill walk of about 1 hour.

The Inca Bridge – This construction is located in the west of Machu Picchu, on a path that marked the limit of the citadel. As its name suggests, it is a bridge made of a wooden log and supported by rustic cobblestones. Due to the narrow roads near cliffs, it is believed that the Incas removed the wooden trunk in case of invasions.

The House of the Guardian – Unlike the rest of the constructions of Machu Picchu, the House of the Guardian is made of stones attached in a rustic way. It probably had the surveillance function. The most remarkable thing is the incredible views of the entire citadel. That’s where tourists get the classic postcard photo with the wonder of the world landscape in the background.

The Main Square – In the heart of the urban sector of Machu Picchu is the Main Square, a construction in the shape of a ‘U’ with immense walls assembled with perfection but damaged by the passage of time. Probably important religious and social ceremonies were held there. This square is believed to represent the constellation of the ‘Southern Cross’.

The Intihuatana – In the highest part of the urban sector of Machu Picchu is the ‘Intihuatana’, a huge rock capriciously carved to serve as a ‘solar clock’ or ‘astronomical calendar’. That is, according to the fall of the sun’s rays on its structures, it predicted the seasons of solstices or equinoxes. Thus he was able to better measure the sowing or harvesting season. It is believed that by reaching out to its structure, tourists are filled with energy.

The Sacred Rock – At the entrance to the Huayna Picchu mountain is the ‘Sacred Rock’, an immense rock carved in the shape of a mountain. It has a height of 7 meters and a width of 3 meters. The Incas worshiped the mountains whom they called ‘apus’ (‘great lord’ in Quechua language). It is believed that the Sacred Rock radiates energy to the people who will make the trek to the top of Huayna Picchu.

The Temple of the Condor – In the urban sector, a few steps from the Temple of the Sun, there is a mysterious rock carved in the shape of the body of an Andean condor. For the Incas, this formidable bird was sacred because it communicated the earthly world (kay pacha) with the world above (hanan pacha). This bird is the second largest in the world, after the albatross.

The Temple of the Sun – The sun was the highest deity of the Incas. In the center of the urban sector there is a mysterious temple in his honor. This construction is the only one in a circular shape. It has finely carved walls. Under its structures there is a cavern that leads to an enclosure forbidden to visitors where offerings of gold and silver were probably found. The entrance to the Temple of the Sun is prohibited, only a view can be made from a safe distance.

Optional entrance to the mountains of Machu Picchu

Machu Picchu is surrounded by two mountains: Huayna Picchu and Machupicchu Mountain. The entrance to these mountains is with two special tickets that cost 200 Peruvian soles (57 US dollars approximately).

El Huayna Picchu – The top of this mountain is 2,720 meters above sea level (about 300 meters above the archaeological site of Machu Picchu). To get there, the Incas built hundreds of stone steps over 2 kilometers. From its top you have incredible views of the entire place. On its slopes there is a mysterious cavern with fine constructions called the ‘Temple of the moon’ or also ‘The great cavern’.

Machu Picchu Mountain – The top of this mountain is 3,082 meters above sea level (about 600 meters above the archaeological site of Machu Picchu). To get there, the Incas also built hundreds of stone stairs for a stretch of approximately 2 kilometers. Its top is at the top of the place, from where you have incredible views of Machupicchu. The name of this mountain was used to name the Inca city. 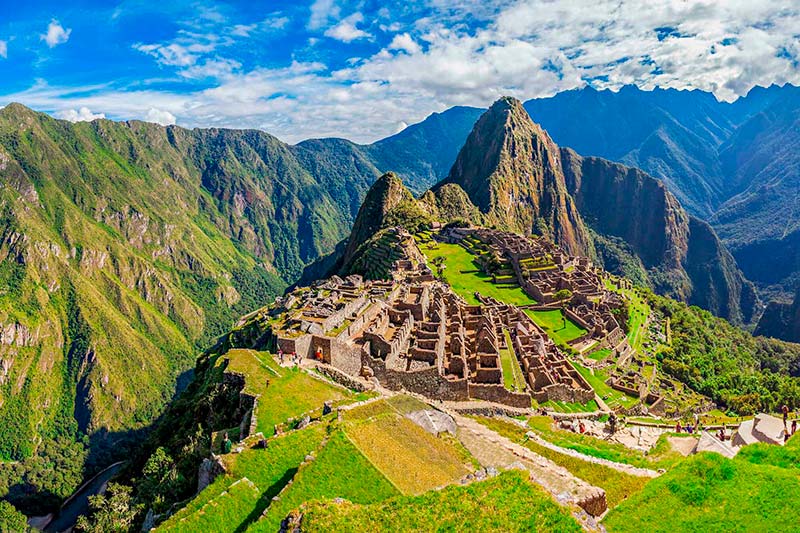