The Inca road network is a system of roads that linked the most important points of the immense empire of the Incas. This network of trails was called ‘qhapac ñan’, Quechua language words that mean ‘way of the king or of the powerful’. Many sections of these roads continue in good condition and preserved by several countries in South America. It is considered Cultural Heritage of Humanity by Unesco. Today, a part of these sections is the famous route that ends in Machu Picchu.

What is the Inca trail network?

The network of Inca trails, known in the Quechua language as ‘qhapac ñan’ (main road or path of the powerful), is an immense connection of Inca trails built for the most part by Emperor Pachacutec in the 15th century.

The network of Inca roads covered part of the territories of the current countries of Peru, Bolivia, Ecuador, Colombia, Chile and Argentina. Due to their historical importance, they are currently considered ‘Cultural Heritage of Humanity’ by Unesco. Because of this they are protected and preserved for the future.

What was the importance of the qhapac ñan?

The qhapaq ñan is the word that defines the road system of the Inca civilization. It is the best proof of the development reached by the Incas in civil engineering. It is worth mentioning that this network of roads was built on one of the most rugged territories in the world. He managed to cross the rugged Andes Mountains and the arid deserts of the South American coast.

This network of roads crossed the empire of the Incas by routes drawn from north to south (from end to end) along the coast and through the Andes Mountains. There were small sections for the common population. There were also wide stretches dedicated to Inca royalty. The roads of the mountains had sections completely paved while those of the coast were built simply of earth.

The world famous Inca Trail to Machu Picchu is just one part of this complex network of roads. Go up the Urubamba river basin to the Inca city, after winding difficult mountains. At present it is considered the best hiking route in Peru. You can visit it in four days through a perfectly planned tour.

The Qhapac ñan were built with the main purpose of keeping a huge territory communicated. This made it possible to mobilize armies very quickly. It also served as a trade route in a civilization prone to redistribution and exchange. Another extremely important purpose was the culturalization of the newly conquered peoples. It should be noted that these roads were built in the expansionist time of the Incas.

What is the length of these roads?

At present, more than 60 thousand kilometers of roads that formed this enormous network have been identified. But studies carried out reveal that the qhapaq ñan would be made up of more than double that identified throughout the South American territory.

Map of the Inca trails 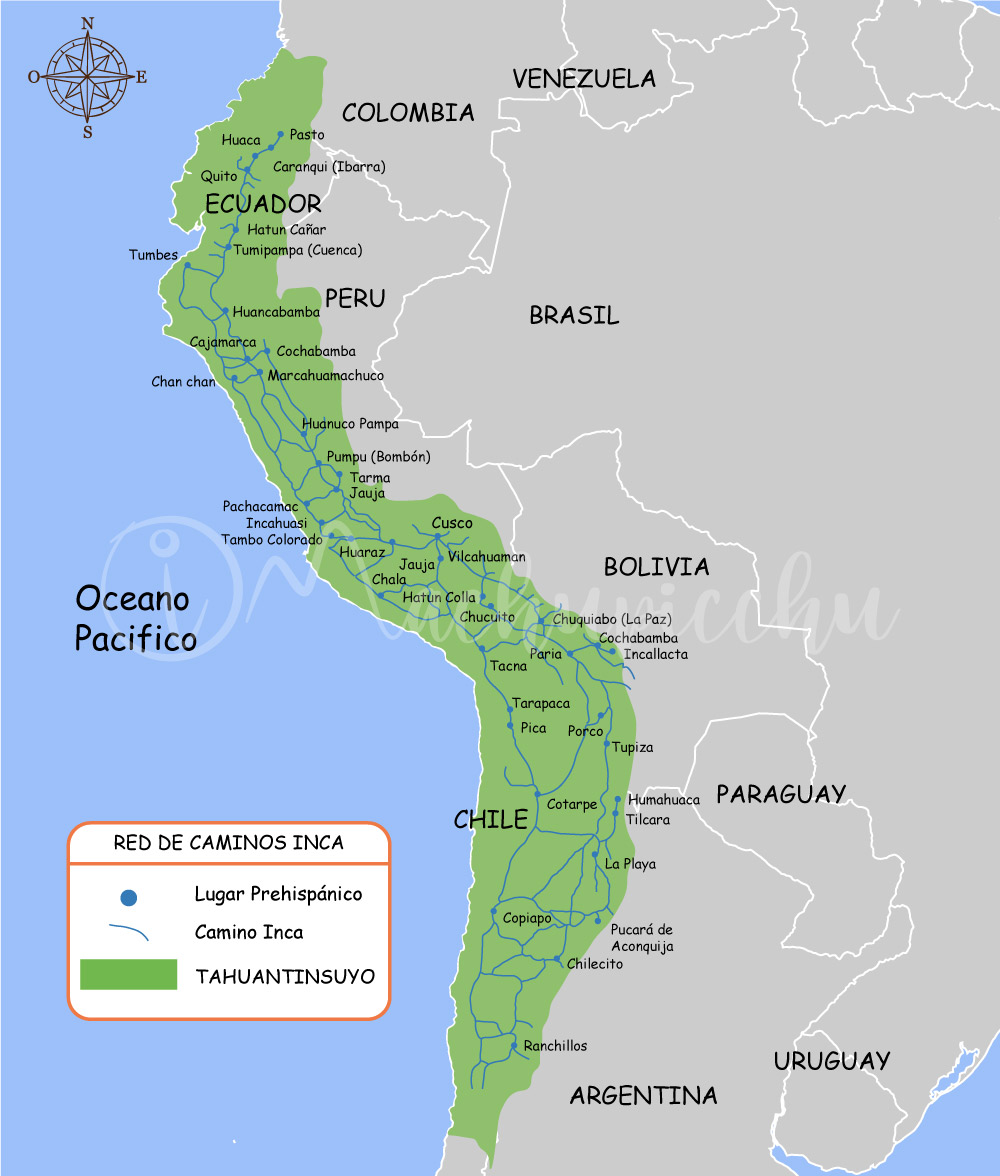 What was its function?

The route of the roads, in addition to connecting one town with another, served to connect the culture of the towns of the time. Likewise, its function was that of a trade route and strategic routes of cultural connection between the different towns of the immense Inca empire. This is how Inca cities were integrated such as: Vilcashuaman, Pumpu, Hatun Xauxa, Huánuco Pampa, Cajamarca, Quito, etc.

The qhapaq ñan shows many sections where there are two parallel roads on a trunk route. It is known that the Inca, his court and his armies would go through one of them, while the other was destined for the people.

Likewise, this road network had a commercial function as it provided different cities with products that were harvested at different altitudes. For example, the city of Cusco was able to supply itself with: chili, cotton, coca, corn, fish, mullu and even the famous spondylus shell. 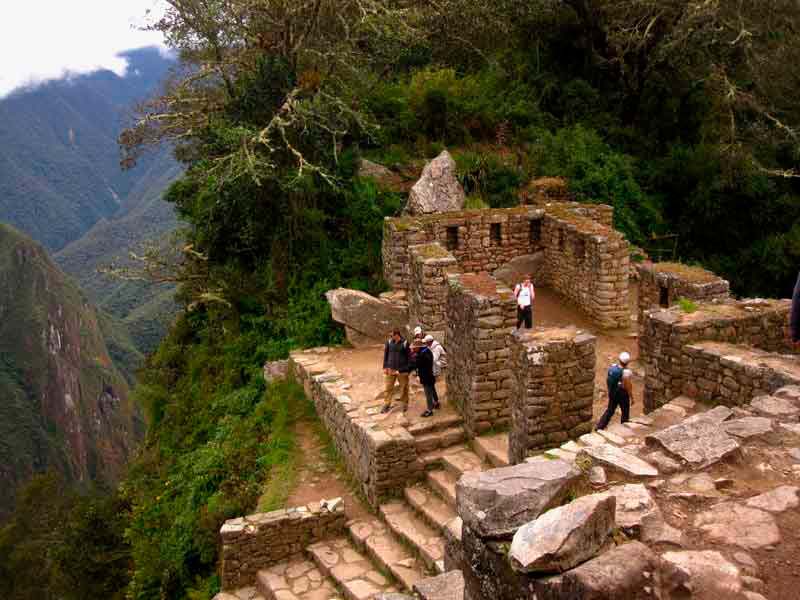 How is it designed?

The qhapac ñan are designed in response to the coastal and mountain geography. There are stretches in immense arid plains up to the most rugged mountains of the Andes mountain range. There are also countless slopes, cliffs, mountains, pampas, swamps, gorges, and canyons. In many cases, the most difficult sections were solved with bridges and uneven roads.

Constructions along the roads

The difficult South American geography and the immense distances that the Qhapac ñan traveled forced the Incas to build certain structures necessary for the proper functioning of the roads.

The roads to Machu Picchu

The Inca Trail is the small network of roads that connects the towns of Cusco with the Inca city of Machu Picchu. With the discovery of this archaeological site in 1911, part of this section of the Qhapac ñan was unearthed. Since then these trails have been valued.

Due to its location on the slopes of mountain ranges, this section of the Inca Trail was built following the characteristics of the mountain roads. The Incas first made the layout of the road, then the foundation of the soil with several layers of stone and earth. Next, the paving and drainage system were made. Due to their complex construction, these trails are kept in good condition.

This section of the Inca Trail was not discovered by the Spanish. It is also believed that they did not give it the necessary importance. In any case, the Spanish did not reach Machu Picchu, which, after being abandoned, was hidden in the thick vegetation over the years. The section from qhapac ñan to the Inca city also suffered the same fate.

Currently, the section of qhapac ñan that connects Cusco with Machu Picchu was valued and adapted to be traveled by tourists. It is a route of almost 40 kilometers that is crossed in 3 days and 3 nights. The fourth day is dedicated to visiting Machu Picchu.

Unlike other hiking trails in Cusco, the Inca Trail to Machu Picchu is protected by the Peruvian State. This is due to the historical value of the sections of Qhapac ñan that it runs through. Therefore, no unauthorized person can walk its ways.

The only way to get this authorization and travel the Inca Trail is to hire a tour through an authorized tourism agency. The tourism agencies manage the permits with the Ministry of Culture of Peru and add a tour guide service, camping equipment, food, tickets to Machu Picchu and more services for the visitor.

Currently there are many tourists who want to make the Inca Trail to Machu Picchu. Due to the high demand of visitors, tours must be purchased online 6 or 7 months in advance. It is the best hiking trail in Peru.

Interested in the Inca Trail? Know more about Routes!