Spectacled bear on the Inca Trail to Machu Picchu

The spectacled bear is also called Andean bear because it inhabits the eastern region of the Andes Mountains in South America. In the Historic Sanctuary of Machu Picchu (an area protected by the Peruvian State) there is a population of approximately 70 bears. These are not easily seen, although sometimes they even roam the Inca city of Machupicchu. The best occasion to visit their habitat is by doing the 4-day Inca Trail. Learn more about this amazing species.

Note:
The Inca Trail to Machu Picchu takes 4 days in which visitors walk 39 kilometers. In the last two days of walking you can see humid tropical landscapes where the spectacled bear lives. This peculiar animal is not aggressive. Likewise, if you spot one, it is recommended to keep a safe distance. In 2021 two spectacled bears walked through the archaeological site of Machu Picchu. In the town of Aguas Calientes there is a conservation center where you can observe these animals.

The spectacled bear (Tremarctos ornatus) is one of the eight species of bear in the world (the others are the giant panda, the Malayan, the black from Asia, the bezudo, the polar, the brown and the black from America).

It is known as ‘ukuko’ by the inhabitants of Cusco. It lives in a tropical Andean geography, between 500 meters to 4,500 meters of altitude. This animal prefers to live in the humid forests of the high jungle where there is a lot of rainfall (and fruits with which to feed).

In Peru there is a population of approximately 18 thousand spectacled bears. It is considered to be an animal in a ‘vulnerable situation’. In 1,800 square kilometers of land area, only 5,000 bears have been registered. Yet Peru has the largest spectacled bear population in South America.

The spectacled bear can measure between 1.30 and 1.90 meters tall (standing on its two legs). It has a large head disproportionate to its body. Its tail is small (it measures approximately 8 centimeters). Males are larger than females. They can weigh from 80 to 125 kilos.

It is considered a plantigrade because it supports the soles of its legs on the ground. It has five fingers, with very sharp claws, which allow it to climb trees with ease. It has a short brown muzzle.

The Machu Picchu Spectacled Bear has long, thick black fur. He has a few yellowish, circle-shaped spots on his face near his eyes. Because of this it has been given the popular name of the spectacled bear.

He is a vegetarian bear (only 5% of his diet is of animal origin). It feeds preferably on fruits, roots, cuts, leaves and fungi, insects, honey, eggs, rodents, among others.

It has solitary habits. They walk through wooded areas, climb trees, and mark their territory with scratches and scent. Trees are very important to them. It is there where they find their food and specific places to rest.

The female usually gives birth to two cubs. It is considered as a seed disperser and pollinator. He is a sullen bear. Scared easily. The Historic Sanctuary of Machu Picchu is one of the places where ‘ukuku’ can roam freely, although the possibility of being hunted illegally is not ruled out. 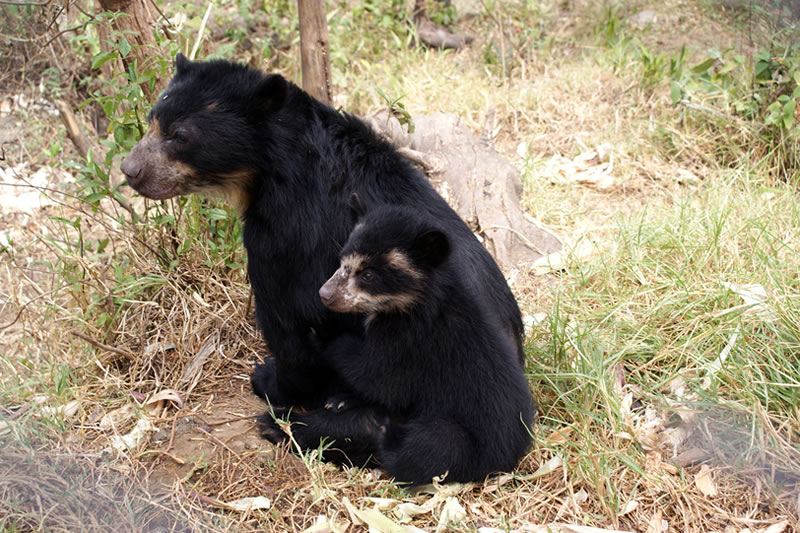 The spectacled bear on the Inca Trail

Although it is not frequent, on the route of the Inca Trail spectacled bears can be seen. If you see one of these animals, keep your distance with your group. Remember that bears are only looking for food. Don’t scare them away because they can act in self-defense. Follow the directions of the guide who will accompany you.

During the third and last day of the Inca Trail there are more possibilities to know the habitat of the spectacled bear. With a bit of luck, you can even see it walking through the trees of the place. Remember that these animals are protected by the Peruvian State. Therefore, their hunting is a crime.

Threats to the Spectacled Bear in Machu Picchu

In the Historic Sanctuary of Machu Picchu there is probably a population of 70 bears.

One threat is deforestation caused by forest fires and forest clearing. Another problem is poaching. The spectacled bear is considered a threat to livestock. They are hunted and taken into captivity as a circus attraction where they are mistreated.

How to protect it?

In 2009, amid the Inca walls of Machu Picchu, a spectacled bear and its calf could be seen. This came as a surprise to the visitors. Since the 1980s, up to four entries of these bears have been recorded in the park. Spectacled bears prefer to do it very early in the morning or after five in the afternoon.

During the Inca Trail it is advisable not to leave food on the route. This helps not alter your diet and eating routine. If you want to see spectacled bears up close in the town of Aguas Calientes (Machu Picchu town), there is a “Spectacled Bear Conservation Project” at the Inkaterra hotel.

This private conservation project together with the National Institute of Natural Resources (INRENA) rescued three bears: one that lived in a Cusco zoo for almost 21 years. The other was saved from a forest fire. The third was brought by a farmer who kept it as a pet.

Currently there are five rescued bears that are in custody and in the process of re-insertion to their natural habitat. The project accepts voluntary donations for the protection of the Spectacled Bear.

The spectacled bear, Ukuku or Ukumari, is present in oral traditions that tell that there was once a hairy young man who was the son of a bear’s love affair with a beautiful peasant woman.

The hairy young man is the Ukuku (a typical Cusco dancer who is especially related to the Qoyllur Riti festival). This festival takes place in the snowy Ausangate, near the city of Cusco. Today this religious festival is the largest pilgrimage in the Andes Mountains (it brings together more than 10 thousand people).

The Ukuku wears a suit made of black wool, a white balaclava and emits sounds similar to that of an animal because it is a mythical character. This dancer is also present in other traditional festivities of Cusco.