Megadiversity on the Inca Trail

Peru is one of the seventeen most megadiverse countries on the planet. It has many species of flora and fauna due to its special geography. It has an arid coastline with islands, a mountain range with snowy peaks and deep canyons, as well as a vast Amazon jungle that is home to a large part of the world’s animals and birds. The Inca Trail is one of the most biodiverse hiking trails in Peru. It is a great opportunity to learn more about the country’s mega-diversity.

Megadiversity refers to the many species of animals, birds, plants, fish or ecosystems that can be found in a geographic area or country.

Megadiversity is a word used for the first time by the Center for Monitoring the Conservation of the Environment (entity that belongs to the United Nations). Its objective? It is precisely to protect the most megadiverse territories on the planet for the future.

The most megadiverse places on the planet are obviously notable for the diversity of their geography. They are generally large territories with tropical forests and other types of ecosystems. This diversity is a plus that attracts thousands of visitors from around the world.

Is Peru a megadiverse country?

Peru is a country with a complex geography, where the presence of the Andes drastically influences the climate and as a consequence of this, the diverse flora and fauna, placing it among one of the 17 mega diverse countries in the world.

Likewise, Peru has 1,600 ornamental plants, 787 food plants and 1,300 medicinal plants. It ranks second in area of tropical forests. The fifth place of reptiles with 421 species. It has more than 20 thousand species of flowering plants (28% endemic species) and 36 types of corn.

The megadiversity on the Inca Trail to Machu Picchu

The Inca Trail is located within the incredible landscapes of the Historic Sanctuary of Machu Picchu. It has a great biological diversity, it has an exceptional natural wealth. For this reason it is considered a Natural and Cultural Heritage of Humanity.

20% of all known species of butterflies in the world are found in Machu Picchu. It has geomorphological characteristics that interact between species of flora and fauna of the Amazon and the Andes. In addition, the Historic Sanctuary of Machu Picchu has become a refuge for endangered species.

The Inca Trail has valleys, humid forests, grasslands and snow-capped mountains. It is an important place of orchid production. It is home to the spectacled bear (14 sightings a year), the torrent duck, the cock of the rocks and otters. 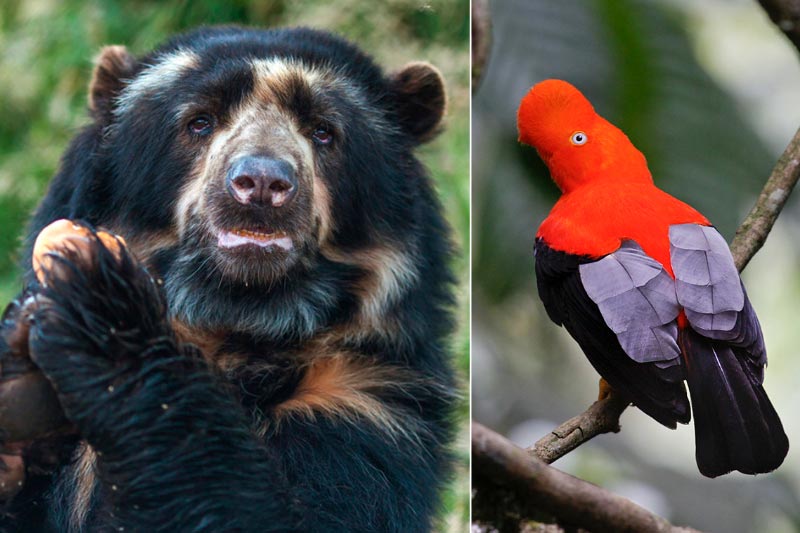 The Spectacled Bear and the Cock of the Rocks

Learn more about biodiversity on the Inca Trail

According to the Sernanp (National Service of Protected Natural Areas) the Inca Trail and the Historic Sanctuary of Machu Picchu have 13 species of fish, 12 species of amphibians, 22 species of reptiles, 423 species of birds and 53 species of mammals.

Some of the most famous species during the route are: the cock of the rocks (Rupicola peruvianus), the spectacled bear (Tremarctos ornatus), the llama (Lama glama), the giant hummingbird (Patagona gigas), the torrent duck (Merganetta armata), the Andean deer (Hippocamelus antisensis) and the Andean puma (Puma concolor).

The important biodiversity during the Inca Trail must be protected by visitors. It is forbidden to pluck flowers or disturb the birds or mammals of the place. The route is protected by the Peruvian State. To do the hiking route it is necessary to buy a tour with a tourism agency. Due to limited availability, the purchase of the tour must be made 6 or 7 months in advance.