The platforms on the Inca Trail

During the Inca Trail to Machu Picchu it is possible to observe the immense chains of platforms built by the Incas. It is that both Machu Picchu and the other citadels during the route could sustain themselves thanks to their food productivity. The platforms played a fundamental role for the production of food in the Inca empire. Learn more about the platforms on the Inca Trail.

Note:
In the Peruvian Andes the territory is very rough. There are peaks, high mountains, rivers, rocky places, etc. All this offered an unfavorable terrain for agriculture. So for the Incas it was a great challenge to develop techniques to make land use more efficient. During Inca times, the main concern was to gain land for agriculture; for that reason, they built their cities on high and stony places. On the Inca Trail it is possible to see dozens of platforms. For this and other aspects, this hiking route is considered one of the best on the planet.

What are the platforms?

The platforms were constructions that, like wide steps, were worked in the mountains to gain land in favor of agriculture.

They were built on the slopes, high in the mountains, and everywhere. This created ideal areas for agriculture where otherwise large-scale production would be difficult.

The Inca terraces or terraces were the most important works of adaptation to the Inca landscape. Before the Incas, the platforms were used by pre-Inca cultures. However, it was the Incas who took these constructions to their maximum expression.

What types of platforms did the Incas build?

The Incas developed the following types of platforms:

The containment platforms – They were constructions that were made to avoid the erosion of the hills. They were necessary before carrying out a large work such as temples, houses, cities, etc. On the Inca Trail they can be seen in archaeological sites such as Phuyupatamarca, Wiñayhuayna and Machu Picchu.

The agricultural platforms – They served to obtain useful land for planting on the slopes. These platforms helped to prevent soil erosion, allowed better use of water from both rain and irrigation. For this they used the channels that communicated at their various levels. They were of great extension, they served to acclimatize products. They supplied products to the population. They were the economic support of the great Inca state.

Platforms located in the ceremonial centers – They were built with the best carved stones. They had less extension. They were related to important centers, whether ceremonial or administrative. They were leaning towards the slope for better resistance. They are characterized by artificially molding the slopes, the hills, being able to see curved or zigzag lines as a final result. They also served as ornamental structures. In Cusco, the platforms of Pisac, Ollantaytambo and Machu Picchu stand out.

Will I be able to see platforms on the Inca Trail?

Along the Inca Trail it is possible to appreciate containment, agriculture and ceremonial platforms. In some sections of the route you can see containment platforms that support part of the roads (qhapac ñan).

The most important ceremonial and agricultural platforms can be seen in the Inca archaeological sites: Llactapata, Runkurakay, Sayacmarca, Phuyupatamarca, Intipata, Wiñayhuayna and, of course, Machu Picchu.

The Inca terraces were important because they allowed expanding agricultural frontiers. The Incas gained space to grow more products. They also helped prevent the erosion of the hills. They were also the complementary part of the most important ceremonial constructions.

Archaeological sites on the Inca Trail

These are some Inca archaeological sites where you can see platforms on the Inca Trail:

Llactapata – This small citadel is on the edge of a ravine. It has rustic buildings where large platforms are located. It has a privileged view of the Urubamba valley. It is visited on the first day of the Inca Trail.

Runkurakay – This checkpoint has circular structures. The food produced by the platforms was stored there. Due to its location at 3,800 meters above sea level, it is often covered by dense fog. It is visited on the third day of the Inca Trail.

Sayacmarca – This checkpoint has stairways, water channels, paths, smaller areas and platforms. Agricultural products were grown on its platforms, which were later stored in its ‘colcas’ (warehouses). It has incredible views of the entire place. It can be visited on the third day of the Inca Trail.

Intipata – This citadel stands out for its immense and high platforms where a variety of agricultural products were grown. From there you have incredible views of the place. It is 2,840 meters above sea level. It can be visited on the third day. However, due to the difficulty to get there (ascending roads) not many tourists dare to go.

Wiñayhuayna – This citadel is one of the most beautiful and emblematic of the Inca Trail, after Machu Picchu. It has a wide network of agricultural terraces that offer an incredible landscape. Its name means ‘Forever young’ and is related to the ‘wiñayhuayna’ orchid flower that abounds there. It is visited on the third day of the day.

Machu Picchu – The ‘Inca city’ has minor precincts and high-quality temples where its wide network of platforms stand out. It stands out for constructions such as the Temple of the Sun, the Intihuatana, the Sacred Rock and more. It is the final destination of the Inca Trail. It is considered one of the wonders of the modern world. 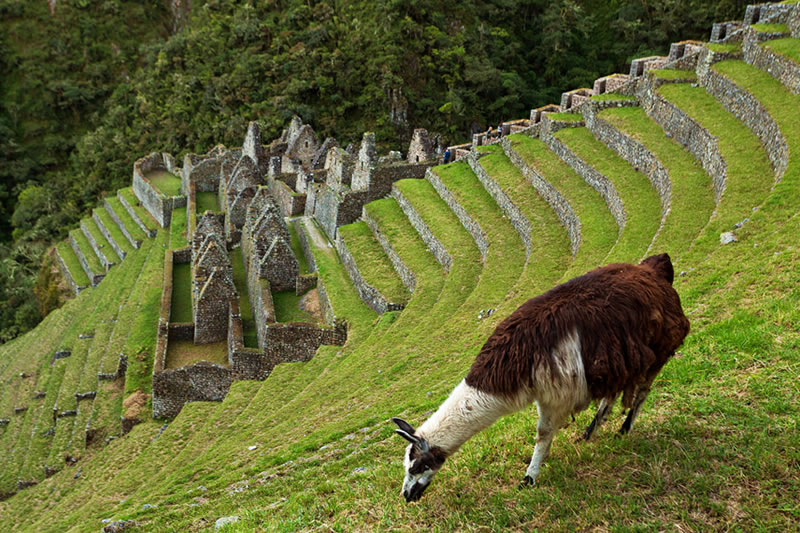 Platforms on the Inca Trail

The platforms had different altitudes. In archaeological sites such as Machu Picchu, Wiñayhuayna or Phuyupatamarca there are platforms of more than 2 meters of altitude. Products such as potatoes, quinoa, goose, corn and the famous coca leaf were grown there.

In Machu Picchu the entrance to the platforms is prohibited. The route follows stone paths traced by the Incas themselves. The flames that inhabit the citadel usually graze on the platforms.

The Inca Trail closes every year in February. In that month, the wettest of the year, maintenance work is carried out on roads, canals and platforms. The rest of the year the route is enabled for tourism.

Interested in the Inca Trail? Know more about Archaeological sites!